09/11/18
Today is round 5. I am on 3.5/5 which is not bad as I missed a round. I was playing against James Merriman from England. I am currently living in England so I have played him twice before. I already knew that he was going to play a strange sort of Samisch. I was going to play the Benoni structured King’s Indian. It rained super hard today again and we got soaked trying to rush to the Playing Hall. The game was over in 1.5 hours because of a miscalculated sac by my opponent. Here is the game: 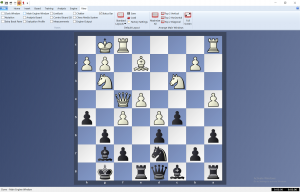 Black has the dark squares here but what should he do to defend this dangerous position?
17…Qf6! Now defending the d6 pawn,threatening to trade queens of and also now joining the defence. Black is now better.

10/11/18
My opponent today was Krishna Nathan from the USA rated 1895. I was white and he was going to play against the French which we prepared. There was no rain meaning we were going to walk to the Playing Hall. The game was indeed a French defence and I ground out a win after 80 moves and 4.5 hours of play. In the middle of the game, I thought about accepting a draw, because it looks like a boring game. However, after re-evaluating my position, I have feeling that I may have some advantages in the end game. The endgame was indeed quite instructive(and long). Even better was the fact that it was on a live board.

11/11/18
I played with FM Christopher Yoo Woojin today from the USA rated 2407!? He is the No. 2 U12 player in the world according to the ELO rating. I have found some news on Internet that he was the youngest ever US player who got the Master title. I was Black and I thought it was time to unleash my secret weapon – The Dragon. There is quite a bit of theory which Peng and I had prepared. I thought at first I didn’t really stand a chance against the u12 number 2 in the world. It was raining so we took the bus to the Playing Hall. The bus schedule had changed meaning we were early. In that time, tried to convince myself I did stand a chance. After 30 minutes of waiting, the games finally begun.

The game was so excited and the opponent started attacking right after the opening. At beginning, I was in a sort of defending mood. Luckily, I did not lose any piece in the middle game and gradually I noticed that he wants to have the end game as soon as possible. After evaluating my position, I think I will not be worse in the end game, so I accepted exchanging pieces. The end game is one bishop + 6 pawns vs one knight + 6 pawns. He was so eager to earn pieces and did not calculate very long. Therefore, after gaining a pawn, he realized that he has to give up his knight! Up to this point, there is no fight on the board and he resigned after a few more moves. I was so happy that I can win this world-leading player. After the game, many of my friends, including GM Lucas van Foreest, sent me congratulation message. Now I am with 5.5 points in the first tier, and I know the real challenge is coming!