Today is a travelling day. We need to get to the train station at 13:00 pm to catch the train to London airport. The journey was far from great but at least we were at the airport one hour before the scheduled departure time. Security check did not go through, so the staff members have to manually check our luggage. For no obvious reasons, the whole procedure took more than 30 mins, though they promised that the flight will be waiting for us. The gate was unfortunately closed before we got there. For sure, we missed our flight and I will not get the tournament started in next day. Now, I am hungry, tired and extremely desperate…

After waiting at the airport for the whole night without foods, we decided to buy a standby ticket to Porto next morning and then transport from Porto to Santiago via bus. Probably, this will be my last chance to catch my second game on 5. Nov. Fortunately enough this time we succeeded, and the whole journey was smooth, though it took about in total 8 hours. Finally, we arrived at Santiago around 11:00 pm in the night. Despite physically exhausted, I am mentally keen to start my first game (the second game for others).

In the morning, we started the preparation for today’s game with GM Peng. It is ridiculous that our hotel has no Internet connection! We have to use our parent’s small mobile phones to search opponents’ games. My opponent does not seem to have the recent games online – the last game was 2 years ago. In that game he played the Taimanov so we had a look at that. After the lunch, I had a short rest before rushing into a bus to the venue. When the game started I was happy to see that it was indeed the Taimanov, which means he gets nothing changed in the past 2 years! The game was not difficult, and he played ineffective moves here and there. I (I think) made a good move (Bb1) at No. 17 step (please see attached game), which eventually leads to a win after 1.5 hours. 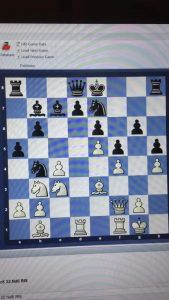 Not only did I have a good day, the whole Dutch team did also rather well scoring 3/3!